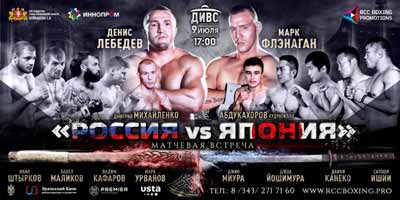 Review by AllTheBestFights.com: 2017-07-09, Ivan Shtyrkov vs Satoshi Ishii gets three stars only thanks to a good finish.

The undefeated Ivan Shtyrkov entered this fight with a perfect mma record of 10-0-0 (80% finishing rate) and he is ranked as the No.24 heavyweight in the world. ‘Ural Hulk’ Shtyrkov has already fought twice in 2017 winning over Rodney Wallace and Philip De Fries.
His opponent, the black belt in judo and 2008 Olympic judo gold medalist Satoshi Ishii, has an official record of 15-7-1 (47% finishing rate) and he entered as the No.42 in the same weight class but he lost three out of his last four bouts, against Jiri Prochazka (=Ishii vs Prochazka), Quinton ‘Rampage’ Jackson (=Jackson vs Ishii) and Muhammad ‘King Mo’ Lawal (=Lawal vs Ishii); he came back to win in 2017 with Heath Herring. Ivan Shtyrkov vs Satoshi Ishii is on the undercard of Denis Lebedev vs Mark Flanagan – RCC 2017. Watch the video and rate this fight!