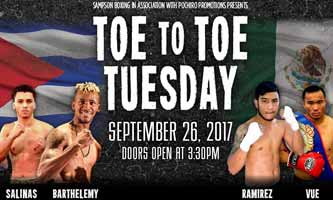 Review by AllTheBestFights.com: 2017-09-26, pretty good fight between Eduardo Ramirez and Leduan Barthelemy: it gets three stars.

Both undefeated, the Mexican Eduardo Ramirez entered this fight with a professional boxing record of 20-0-2 (7 knockouts) and he is ranked as the No.13 super bantamweight in the world while his opponent, the Cuban Leduan Barthelemy, has a perfect record of 13-0-0 (7 knockouts) and he entered as the No.56 super featherweight. Ramirez has fought once in 2017 beating Guillermo Osvaldo Soloppi while Barthelemy has fought twice winning over Jesus Aguinaga and Reynaldo Blanco. Leduan Barthelemy vs Eduardo Ramirez is the main event of the evening. Watch the video and rate this fight!