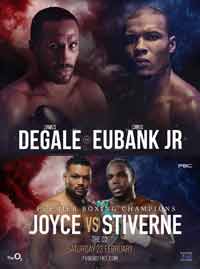 Review by AllTheBestFights.com: 2019-02-23, pretty good fight between Lee Selby and Omar Douglas: it gets three stars.

The former Ibf Fw champion Lee Selby entered this fight with a pro record of 26-2-0 (9 knockouts) and he is ranked as the No.5 featherweight in the world (currently the #1 in this division is Leo Santa Cruz) but he comes off the loss against Josh Warrington (Lee Selby vs Josh Warrington). Before this bout, in 2017, he had won three times beating Andoni Gago (Selby vs Gago), Jonathan Victor Barros (Selby vs Barros) and Eduardo Ramirez(Lee Selby vs Eduardo Ramirez).
His opponent, Omar Douglas, has an official boxing record of 19-2-0 (13 knockouts) and he entered as the No.69 super featherweight. He lost two consecutive fights between 2016 and 2017, against Javier Fortuna (Javier Fortuna vs Omar Douglas) and Edner Cherry, but then he has beat Isaias Martin Cardona Gonzales and Haskell Lydell Rhodes. Selby vs Douglas is on the undercard of James DeGale vs Chris Eubank Jr. Watch the video and rate this fight!