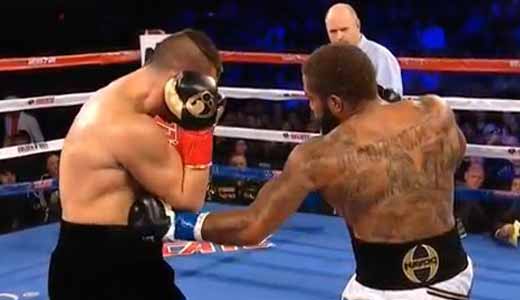 Review by AllTheBestFights.com: 2017-03-11, nice and tough exchanges with a fantastic finish: David Lemieux vs Curtis Stevens is one of the best boxing fights of 2017 and it gets four stars!

The former Ibf Mw champion David Lemieux entered this fight with a pro record of 36-3-0 (32 KOs=89%) and he is ranked as the No.4 middleweight in the world. He lost to #1 Gennady Golovkin in 2015 (=Golovkin vs Lemieux) but he came back to win in 2016 defeating Glen Tapia (=Lemieux vs Tapia) and Cristian Fabian Rios (=Lemieux vs Rios).
His opponent, Curtis Stevens, has an official boxing record of 29-5-0 (21 knockouts) and he entered as the No.16 in the same weight class. He was defeated by Hassan N’Dam N’Jikam in 2014 (=Stevens vs N’Dam) but then he has won over Patrick Teixeira (=Teixeira vs Stevens) and James De la Rosa. David Lemieux vs Curtis Stevens is the main event of the evening. Watch the video and rate this fight!