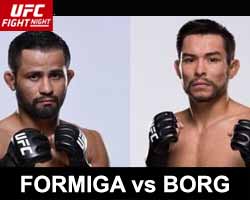 Review by AllTheBestFights.com: 2017-03-11, disappointing fight between Jussier da Silva and Ray Borg: it gets two stars.

The black belt in Brazilian jiu-jitsu and judo Jussier ‘Formiga’ da Silva entered this fight with a professional record of 19-4-0 (42% submission victory rate – he has never won via ko/tko) and he is ranked as the No.5 flyweight in the world (currently the #1 in this division is Demetrious Johnson). He lost to Henry Cejudo in 2015 (via split decision, Formiga vs Cejudo) but he came back to win in 2016 beating Dustin Ortiz (=Formiga vs Ortiz).
His opponent, Ray Borg, has a mma record of 10-2-0 (70% finishing rate) and he entered as the No.11 in the same weight class. He fought twice last year losing to Justin Scoggins (=Borg vs Scoggins) and defeating Louis Smolka (=Smolka vs Borg). Ray Borg vs Jussier Formiga da Silva is on the undercard of Vitor Belfort vs Kelvin Gastelum – UFC Fight Night 106. Watch the video and rate this fight!