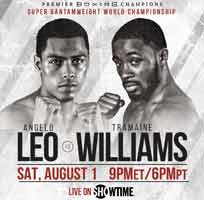 Review by AllTheBestFights.com: 2020-08-01, fight not so exciting between Angelo Leo and Tramaine Williams: it gets two stars.
Both undefeated, the Wbo NABO super bantamweight champion Angelo Leo has an official record of 19-0-0 (9 knockouts) and he is ranked as the No.9 super bantamweight in the world while his opponent Tramaine Williams entered this fight with the same record perfect record of 19-0-0 (6 knockouts) and he is ranked as the No.15 in the same weight class. In their last three fights Leo has beat Neil John Tabanao,
Mark John Yap (Angelo Leo vs Mark John Yap) and Cesar Juarez while Williams has won over Ernesto Guerrero, Neil John Tabanao and Yenifel Vicente. Williams vs Leo is valid for the vacant WBO super bantamweight world title (on the original fight card Leo had to face Stephen Fulton but he tested positive for Covid-19). Watch the video and rate this fight!