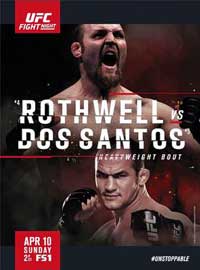 Review by AllTheBestFights.com: 2016-04-10, pretty good finish between Derrick Lewis and Gabriel Gonzaga but it is not enough to get three stars: it gets two.

Derrick Lewis entered this fight with a pro mma record of 14-4-0 (100% finishing rate) and he is ranked as the No.21 heavyweight in the world. He lost to Shawn Jordan last year but then he won over Viktor Pesta and Damian Grabowski.
His opponent, the black belt in Brazilian jiu-jitsu Gabriel Gonzaga, has a record of 17-10-0 (94% finishing rate) and he entered as the No.30 in the same weight class. ‘Napao’ Gonzaga lost three consecutive bouts between 2014 and 2015, the last one against Mirko ‘Cro Cop’ Filipovic (=Gonzaga vs Filipovic 2) but he came back to win in december beating Konstantin Erokhin (=Gonzaga vs Erokhin). Lewis vs Gonzaga is on the undercard of Junior dos Santos vs Ben Rothwell – UFC Fight Night 86. Watch the video and rate this fight!