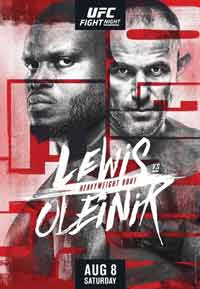 Review by AllTheBestFights.com: 2020-08-08, good fight between Derrick Lewis and Aleksei Oleinik: it gets three stars.
Derrick Lewis entered this fight with a mma record of 23-7-0 (83% finishing rate) and he is ranked as the No.5 heavyweight in the world (currently the #1 in this division is Stipe Miocic). He lost two consecutive bouts between 2018 and 2019, against Daniel Cormier (Daniel Cormier vs Derrick Lewis) and Junior dos Santos (Derrick Lewis vs Junior dos Santos), but then he has beat Blagoy Ivanov (Derrick Lewis vs Blagoy Ivanov) and Ilir Latifi (Derrick Lewis vs Ilir Latifi).
His opponent, the black belt in jujutsu, Bjj and former world combat sambo champ Alexey Oleynik, has an official record of 59-13-1 (92% finishing rate) and he entered as the No.12 in the same weight class. He also lost two consecutive fights, in 2019, against Alistair Overeem (Alistair Overeem vs Alexey Oleynik) and Walt Harris (Alexey Oleynik vs Walt Harris), but then he has defeated Maurice Greene (Alexey Oleynik vs Maurice Greene) and Fabricio Werdum (Alexey Oleynik vs Fabricio Werdum). Oleynik vs Lewis is the main event of the UFC Fight Night 174 (also known as UFC on ESPN+ 32). Watch the video and rate this fight!