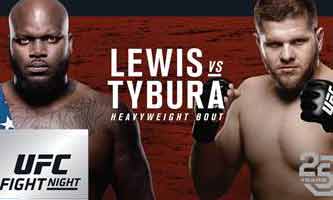 Review by AllTheBestFights.com: 2018-02-18, fight not so exciting between Derrick Lewis and Marcin Tybura: it gets two stars (UFC Performance of the Night).

Derrick Lewis entered this fight with a pro record of 18-5-0 (94% finishing rate) and he is ranked as the No.9 heavyweight in the world (currently the #1 in this division is Stipe Miocic). He fought twice last year beating Travis Browne (Lewis vs Browne) and losing to Mark Hunt (Derrick Lewis vs Mark Hunt).
His opponent, the former M-1 Global Hw champion Marcin Tybura, has a mma record of 16-3-0 (81% finishing rate) and he entered as the No.17 in the same weight class. He fought three times in 2017 defeating Luis Henrique and Andrei Arlovski (Arlovski vs Tybura) but then he lost to Fabricio Werdum (Fabricio Werdum vs Marcin Tybura). Lewis vs Tybura is on the undercard of Donald Cerrone vs Yancy Medeiros – UFC Fight Night 126. Watch the video and rate this fight!