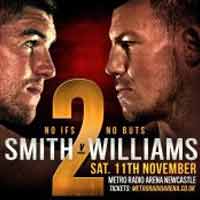 Review by AllTheBestFights.com: 2017-11-11, some good exchanges between Liam Smith and Liam Williams 2 but it is not enough to get three stars: it gets two.

The former Wbo light-Mw champion Liam Smith entered this fight with a pro boxing record of 25-1-1 (14 knockouts) and he is ranked as the No.6 super welterweight in the world (currently the #1 in this division is Erislandy Lara). He suffered his only loss when he faced Saul Canelo Alvarez last year (=Canelo vs Smith), after this bout he has beat Marian Cazacu and Liam Williams in their first fight (but it was a controversial victory since Williams was up on the scorecards until a head butt from Smith caused a nasty cut, Smith vs Williams I).
His opponent, Liam Williams, has a record of 16-1-1 (11 knockouts) and he entered as the No.33 in the same weight class. Before losing to Smith he had beat Gustavo Alberto Sanchez, Gary Corcoran and Gabor Gorbics in 2016. Smith vs Williams 2 is valid for the WBO super welterweight title eliminator. Watch the video and rate this fight!

Their previous fight: Liam Smith vs Liam Williams I