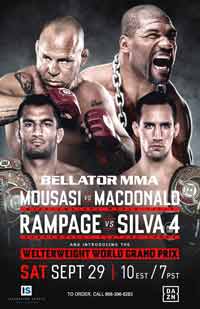 Review by AllTheBestFights.com: 2018-09-29, Douglas Lima vs Andrey Koreshkov 3 gets three stars only thanks to a good finish.

The black belt in Bjj and former Bellator Ww champion Douglas Lima entered this fight with a mma record of 29-7-0 (83% finishing rate) and he is ranked as the No.16 welterweight in the world but he comes off the loss against Rory MacDonald (Douglas Lima vs Rory MacDonald); before this bout, in 2017, he had beat Lorenz Larkin (Lima vs Larkin).
His opponent, former Bellator Ww champ Andrey Koreshkov, has an official record of 21-2-0 (71% finishing rate) and he entered as the No.19 in the same weight class. In their previous fights Koreshkov had beat Lima in 2015 (via unanimous decision, Douglas Lima vs Andrey Koreshkov) while he lost the rematch in 2016 (via ko, Koreshkov vs Lima 2); after this bout he has won over Chidi Njokuani (Andrey Koreshkov vs Chidi Njokuani) and Vaso Bakocevic (Andrey Koreshkov vs Vaso Bakocevic). Lima vs Koreshkov 3 is the quarter-final of the Bellator Welterweight Grand Prix tournament; undercard of Gegard Mousasi vs Rory MacDonald – Bellator 206. Watch the video and rate this fight!