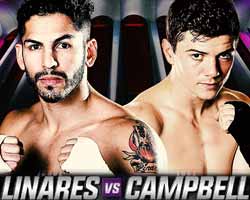 Review by AllTheBestFights.com: 2017-09-23, good fight between Jorge Linares and Luke Campbell: it gets three stars.

The world champion in three different weight classes Jorge Linares entered this fight with a professional record of 42-3-0 (27 knockouts) and he is ranked as the No.2 lightweight in the world (currently the #1 in this division is Robert Easter Jr). He suffered two consecutive defeats between 2011 and 2012, against Antonio DeMarco (=DeMarco vs Linares) and Sergio Thompson (=Linares vs Thompson), but then he has won eleven fights beating Anthony Crolla in 2016 and 2017 (=Crolla vs Linares I and Linares vs Crolla II).
His opponent, the 2012 Olympic bantamweight gold medalist Luke Campbell, has a boxing record of 17-1-0 (14 KOs=82%) and he entered as the No.6 in the same weight class. He suffered his only loss when he faced Yvan Mendy at the end of 2015 (=Campbell vs Mendy), after this fight he has won five bouts beating Jairo Lopez (=Campbell vs Lopez) and Darleys Perez in 2017 (=Campbell vs Perez). Luke Campbell vs Jorge Linares is valid for the WBA World lightweight title (Linares’ second defense). Watch the video and rate this fight!