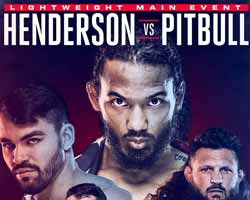 Review by AllTheBestFights.com: 2017-09-23, disappointing fight between Ben Henderson and Patricky Freire: it gets two stars.

The black belt in tae-kwon-do, Bjj and former Ufc Lw champion Benson Henderson entered this fight with a professional mma record of 24-7-0 (54% finishing rate) and he is ranked as the No.9 lightweight in the world. He fought three times in 2016 losing to Andrey Koreshkov (=Koreshkov vs Henderson) and Michael Chandler (=Chandler vs Henderson) but between these two losses he beat Patrício Freire (=Henderson vs Freire).
His opponent, the black belt in Bjj Patricky Freire, has an official record of 17-8-0 (71% finishing rate) and he entered as the No.24 in the same weight class. Patricky Pitbull also lost to Michael Chandler last year (=Chandler vs Freire 2) but he came back to win in 2017 with Josh Thomson (=Thomson vs Freire). Benson Henderson vs Patricky Freire is the main event of Bellator 183. Watch the video and rate this fight!