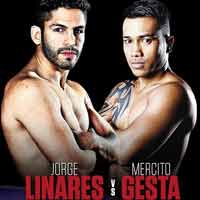 Review by AllTheBestFights.com: 2018-01-27, good fight between Jorge Linares and Mercito Gesta: it gets three stars.

The world champion in three different weight classes Jorge Linares entered this fight with a record of 43-3-0 (27 knockouts) and he is ranked as the No.2 lightweight in the world (currently the #1 in this division is Mikey Garcia). He suffered two consecutive defeats between 2011 and 2012, against Antonio DeMarco (=DeMarco vs Linares) and Sergio Thompson (=Linares vs Thompson), but then he has won twelve fights beating Anthony Crolla in 2016 and 2017 (=Crolla vs Linares I and Linares vs Crolla II) and Luke Campbell in his last bout (=Linares vs Campbell).
His opponent, Mercito Gesta, has an official boxing record of 31-1-2 (17 knockouts) and he entered as the No.26 in the same weight class. He lost to Miguel Vazquez in 2012 (=Vazquez vs Gesta), but since then he has collected five victories and one draw beating Gilberto Gonzalez (=Gesta vs Gonzalez) and Martin Honorio in 2017. Linares vs Gesta is valid for the WBA World lightweight title (Linares’ third defense); undercard of Lucas Matthysse vs Tewa Kiram. Watch the video and rate this fight!