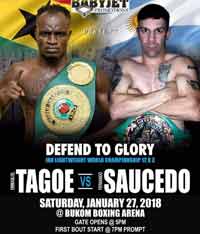 Review by AllTheBestFights.com: 2018-01-27, disappointing fight between Emmanuel Tagoe and Fernando David Saucedo: it gets two stars.

Emmanuel Tagoe entered this fight with a professional record of 27-1-0 (13 knockouts) but he is not ranked as he hasn’t fought since December 2, 2016 when he defeated Mzonke Fana; he suffered his only loss at his first professional bout in 2014, against Lante Addy.
His opponent, Fernando David Saucedo, has an official record of 61-6-3 (10 knockouts) and he entered as the No.39 lightweight in the world. He suffered his last defeat in 2014, against Rances Barthelemy (=Barthelemy vs Saucedo), but since then he has won nine consecutive fights beating Ramon Elizer Esperanza in 2017. Tagoe vs Saucedo is valid for the IBO World lightweight title. Watch the video and rate this fight!

(Free embeddable video hosted on Youtube and not uploaded by AllTheBestFights)
https://www.youtube.com/watch?v=gcGJxlaegKw