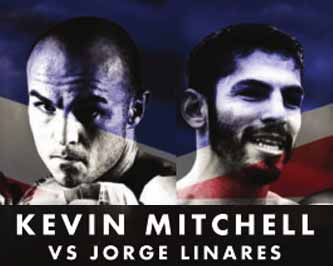 Review by AllTheBestFights.com: 2015-05-30, Kevin Mitchell vs Jorge Linares gets three stars thanks to a good second part of the fight.

Kevin Mitchell entered this fight with a pro boxing record of 39-2-0 (29 knockouts) and he is ranked as the No.4 lightweight in the world (currently the #1 in this division is Mickey Bey). He suffered his last defeat in 2012 when he faced Ricky Burns for the Wbo Lw belt (=Burns vs Mitchell), since then he has won six consecutive fights beating Daniel Estrada in his last bout (=Mitchell vs Estrada).
His opponent, the former Wbc featherweight and super-Fw world champion Jorge Linares, has a record of 38-3-0 (25 knockouts) and he entered as the No.8 in the same weight class. He suffered two consecutive losses between 2011 and 2012, against Antonio DeMarco (=DeMarco vs Linares) and Sergio Thompson (=Linares vs Thompson), but since then he has collected seven victories winning the vacant Wbc Lw belt in his last fight, against Javier Prieto (=Linares vs Prieto). Mitchell vs Linares is valid for the WBC World lightweight title (Linares’ first defense); undercard of Kell Brook vs Frankie Gavin. Watch the video and rate this fight!