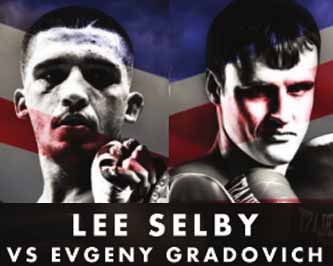 Review by AllTheBestFights.com: 2015-05-30, good fight between Evgeny Gradovich and Lee Selby: it gets three stars.

The undefeated Evgeny Gradovich entered this fight with a boxing record of 19-0-1 (9 knockouts) and he is ranked as the No.10 featherweight in the world (currently the #1 in this division is Nicholas Walters). He won the Ibf Fw belt in 2013 beating Billy Dib (=Dib vs Gradovich) and he successfully defended it four times but in his last bout he drew with Jayson Velez (=Gradovich vs Velez).
His opponent, Lee Selby, has an official record of 20-1-0 (8 knockouts) and he entered as the No.9 in the same weight class. He suffered his only loss in 2009 when he faced Samir Mouneimne, since then he has won 16 consecutive bouts beating Joel Brunker in his last one (=Selby vs Brunker). Gradovich vs Selby is valid for the IBF World featherweight title (Gradovich’s fifth defense); undercard of Kell Brook vs Frankie Gavin. Watch the video and rate this fight!