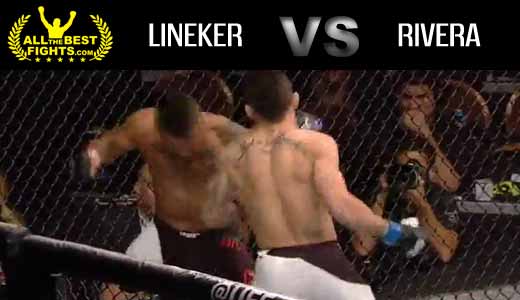 Review by AllTheBestFights.com: 2015-09-05, amazing and tough fight thanks to some tremendous exchanges and a good finish: John Lineker vs Francisco Rivera is a candidate for the mma fight of the year 2015 and it gets five stars (UFC Fight of the Night)!

John Lineker entered this fight with a professional mma record of 25-7-0 (60% finishing rate) and he is ranked as the No.21 bantamweight in the world while his opponent, Francisco Rivera, has an official record of 11-4-0 (73% ko/tko victory rate – he has never won via submission) and he entered as the No.23 in the same weight class. Both fighters lost in 2014: Lineker was defeated by Ali Bagautinov (=Lineker vs Bagautinov) but then he has won over Alptekin Ozkilic (=Lineker vs Ozkilic) and Ian McCall while Rivera lost to Takeya Mizugaki (=Mizugaki vs Rivera) and Urijah Faber (=Faber vs Rivera) but then he came back to win against Alex Caceres (=Rivera vs Caceres). Lineker vs Rivera is on the undercard of Demetrious Johnson vs John Dodson 2 – UFC 191. Watch the video and rate this fight! Watch the video and rate this fight!