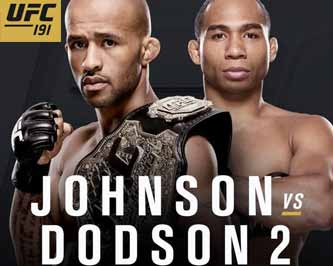 Review by AllTheBestFights.com: 2015-09-05, fight not so exciting between Demetrious Johnson and John Dodson: it gets two stars.

The Ufc Flw champion Demetrious Johnson entered this fight with a professional mma record of 22-2-1 (59% finishing rate) and he is ranked as the No.1 flyweight in the world. ‘Mighty Mouse’ Johnson suffered his last defeat in 2011 when he faced Dominick Cruz (=Cruz vs Johnson), since then he has collected one draw and eight consecutive victories beating Kyoji Horiguchi in his last fight (=Demetrious Johnson vs Kyoji Horiguchi).
His opponent, the black belt in Gaidojutsu and TUF 14 Bw winner John Dodson, has an official record of 17-6-0 (59% finishing rate) and he entered as the No.4 in the same weight class. His last loss occurred in 2013 when he faced Johnson for the first time (=Johnson vs Dodson), after this bout he has won three fights winning over Zach Makovsky in his last one (=Dodson vs Makovsky). Johnson vs Dodson 2, main event of the Ufc 191, is valid for the Ufc flyweight title (Johnson’s seventh consecutive defense). Watch the video and rate this fight!