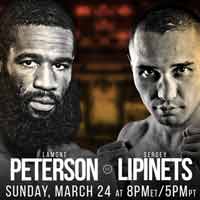 Review by AllTheBestFights.com: 2019-03-24, tough fight with a spectacular finish: Lamont Peterson vs Sergey Lipinets is close to get four stars!

The world champion in two different weight classes Lamont Peterson entered this fight with a professional boxing record of 35-4-1 (17 knockouts) but he is not ranked as he hasn’t fought since January 20, 2018 when he was defeated by Errol Spence Jr (Errol Spence Jr vs Lamont Peterson); before this bout, in 2017, he had beat David Avanesyan (Avanesyan vs Peterson).
His opponent, the former Ibf light-Ww champ Sergey Lipinets, has an official record of 14-1-0 (10 knockouts) and he entered as the No.22 welterweight in the world. He fought twice last year losing his first bout, against Mikey Garcia (Mikey Garcia vs Sergey Lipinets), but then he defeated Erick Bone. Peterson vs Lipinets is the main event of the evening. Watch the video and rate this fight!