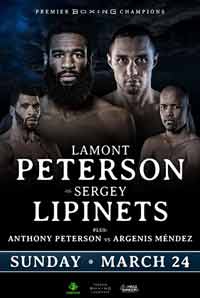 Review by AllTheBestFights.com: 2019-03-24, close fight but not so exciting: Anthony Peterson vs Argenis Mendez gets two stars.

Anthony Peterson entered this fight with a pro boxing record of 37-1-0 (24 knockouts) but he is not ranked as he hasn’t fought since January 20, 2018 when he faced Luis Eduardo Florez (bout ended in a no-contest); he suffered his only loss when he fought against Brandon Rios in 2010.
His opponent, the former Olympian and former Ibf super-Fw champion Argenis Mendez, has a record of 25-5-1 (12 knockouts) and he entered as the No.26 super lightweight in the world. He lost two consecutive bouts in 2016, against Robert Easter Jr (Mendez vs Easter Jr) and Luke Campbell (Luke Campbell vs Argenis Mendez) but then he has beat Ivan Redkach and Eddie Ramirez (Eddie Ramirez vs Argenis Mendez). Peterson vs Mendez is on the undercard of Lamont Peterson vs Sergey Lipinets. Watch the video and rate this fight!