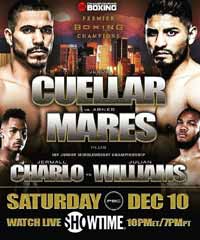 Review by AllTheBestFights.com: 2016-12-10, nice and tough exchanges between Sergey Lipinets and Leonardo Zappavigna: it gets three stars.

The undefeated Sergey Lipinets entered this fight with a perfect record of 10-0-0 (8 KOs=80%) and he is ranked as the No.11 super lightweight in the world. He has fought twice in 2016 beating Levan Ghvamichava (=Lipinets vs Ghvamichava) and Walter Castillo (=Lipinets vs Castillo).
His opponent, the former IBO Lw champion Leonardo Zappavigna, has an official boxing record of 35-2-0 (25 knockouts) and he entered as the No.25 in the same weight class. He suffered two consecutive defeats in 2011, against Miguel Vazquez and Ammeth Diaz but then he has collected 10 consecutive victories beating Ik Yang in 2016. Lipinets vs Zappavigna is on the undercard of Jesus Cuellar vs Abner Mares. Watch the video and rate this fight!