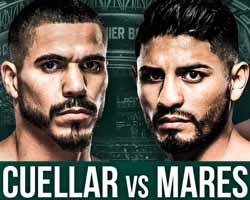 Review by AllTheBestFights.com: 2016-12-10, good performance by both boxers: Abner Mares vs Jesus Cuellar gets three stars.

The Wba Fw champion Jesus Marcelo Andres Cuellar entered this fight with a professional record of 28-1-0 (21 KOs=75%) while his opponent, the former world champion in three different weight classes Abner Mares, has a boxing record of 29-2-1 (15 knockouts). Both boxers are not ranked as they haven’t fought for more than one year: Cuellar fought twice in 2015 beating Vic Darchinyan (=Cuellar vs Darchinyan) and Jonathan Oquendo (=Cuellar vs Oquendo) while Mares defeated Arturo Santos Reyes
(=Mares vs Reyes) but then he lost to Leo Santa Cruz (=Santa Cruz vs Mares). ‘El Jinete’ Cuellar vs Mares is valid for the WBA World featherweight title. Watch the video and rate this fight!

Video: (Free embeddable video hosted on Facebook and not uploaded by AllTheBestFights)