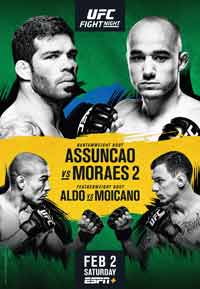 Review by AllTheBestFights.com: 2019-02-02, fight not particularly good between Livia Renata Souza and Sarah Frota: it gets two stars.

The black belt in Brazilian jiu-jitsu and former Invicta FC strawweight champion Livia Renata Souza entered this fight with a record of 12-1-0 (83% finishing rate) and she is ranked as the No.6 women’s strawweight in the world. Livinha Souza lost to Angela Hill in 2016 but then she has won over Ayaka Hamasaki (Ayaka Hamasaki vs Livia Renata Souza), Janaisa Morandin and Alex Chambers.
Her opponent, the undefeated Sarah Frota, has a perfect record of 9-0-0 (78% finishing rate) and she entered as the No.17 women’s flyweight. She fought three times last year beating Tatiane Fontes do Couto and twice Maiara Amanajas dos Santos. Souza vs Frota is on the undercard of Raphael Assuncao vs Marlon Moraes 2 – UFC Fight Night 144 (UFC Fight Night on ESPN+ 2). Watch the video and rate this fight!