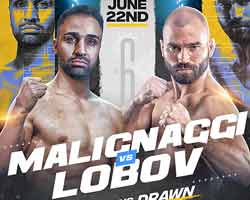 Review by AllTheBestFights.com: 2019-06-22, disappointing fight between Paulie Malignaggi and Artem Lobov: it gets two stars.

The former world champion in two different weight classes Paulie Malignaggi entered this fight with a boxing record of 36-8-0 (7 knockouts) but he is not ranked as he hasn’t fought since March 4, 2017 when he was defeated by Sam Eggington (Sam Eggington vs Paul Malignaggi); before this bout, in 2016, he had beat Gabriel Bracero.
His opponent, the former Ufc fighter Artem Lobov, has an official mma record of 13-15-1 (46% finishing rate) and he entered as the No.112 mma featherweight. He has already fought once in 2019 beating Jason Knight (Bare Knuckle rules, Artem Lobov vs Jason Knight) but in mma he comes off three consecutive losses, suffered against Cub Swanson (Cub Swanson vs Artem Lobov), Andre Fili and Michael Johnson (Michael Johnson vs Artem Lobov). Malignaggi vs Lobov is the main event of BKFC 6 (Bare Knuckle Fighting Championship, organization in which “fighters are not allowed to wrap their hands to within one-inch of the knuckle”). Watch the video and rate this fight!