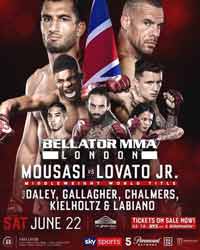 Review by AllTheBestFights.com: 2019-06-22, disappointing fight between Melvin Manhoef and Kent Kauppinen: it gets two stars.

The 43-year-old Melvin Manhoef entered this fight with a pro mma record of 30-14-1 (93% ko/tko victory rate – he has never won via submission) but he is not ranked as he hasn’t fought since April 8, 2017 when he was defeated by Rafael Carvalho (Rafael Carvalho vs Melvin Manhoef 2); before this bout he had already lost to Carvalho in 2016 (Carvalho vs Manhoef I) and he had beat Hisaki Kato in 2015 (Hisaki Kato vs Melvin Manhoef).
His opponent, Kent Kauppinen, has a record of 11-4-0 (100% finishing rate) and he entered as the No.79 light heavyweight. He fought three times last year losing twice, against Fabian Edwards and Walter Gahadza, but then he defeated Alessio Sakara. Manhoef vs Kauppinen is on the undercard of Gegard Mousasi vs Rafael Lovato Jr – Bellator 223. Watch the video and rate this fight!