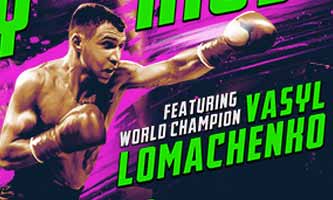 The 2012 and 2008 Olympic Gold Medalist Vasyl Lomachenko entered this fight with a pro boxing record of 4-1-0 with two knockouts (but he has an amazing amateur record of 396-1) and he is ranked as the No.9 featherweight in the world (currently the #1 in this division is Nicholas Walters). He lost to Orlando Salido at his second professional bout in 2014 (via split decision, Salido vs Lomachenko), but then he won the vacant WBO World featherweight title against Gary Russell Jr (=Lomachenko vs Russell Jr) and he successfully defended it twice beating Gamalier Rodriguez in his last fight (=Lomachenko vs Rodriguez).
His opponent, Romulo Koasicha, has a record of 25-4-0 (15 knockouts) and he entered as the No.24 in the same weight class. He suffered his last defeat last year, against Lee Selby (=Selby vs Koasicha), but then he has won four consecutive bouts. Lomachenko vs Koasicha is valid for the WBO World featherweight title (Lomachenko’s third defense); undercard of Timothy Bradley vs Brandon Rios. Watch the video and rate this fight!