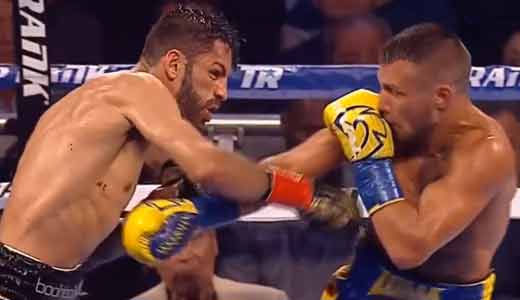 Review by AllTheBestFights.com: 2018-05-12, good pace, some exciting exchanges but above all, one of the best technical (but not boring) fights in the last years, this is boxing at his very best: Vasyl Lomachenko vs Jorge Linares is one of the best boxing fights of 2018 and it gets four stars!

The world champion in three different weight classes Jorge Linares entered this fight with a professional boxing record of 44-3-0 (27 knockouts) and he is ranked as the No.1 lightweight in the world. He suffered two consecutive defeats between 2011 and 2012, against Antonio DeMarco (DeMarco vs Linares) and Sergio Thompson (Linares vs Thompson), but then he has won 13 fights beating Luke Campbell (Linares vs Campbell) and Mercito Gesta in his last two (Jorge Linares vs Mercito Gesta).
His opponent, the 2012 and 2008 Olympic gold medalist and world champion in two different weight classes Vasyl Lomachenko, has an official record of 10-1-0 (8 KOs=80%) and he entered as the No.1 super featherweight. He lost to Orlando Salido at his second professional bout in 2014 (controversial split decision, Salido vs Lomachenko) but since then he has won nine consecutive fights defending the Wbo super-Fw belt three times in 2017: with Jason Sosa (Lomachenko vs Sosa), Miguel Marriaga (Lomachenko vs Marriaga) and Guillermo Rigondeaux (Vasyl Lomachenko vs Guillermo Rigondeaux). Linares vs Lomachenko is valid for the WBA Super World lightweight title (Linares’ fourth defense). Watch the video and rate this fight!

(Free embeddable video hosted on Youtube and not uploaded by AllTheBestFights)
https://www.youtube.com/watch?v=s9KxV-UW1R8