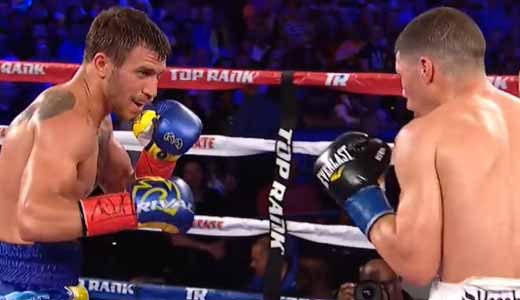 Review by AllTheBestFights.com: 2016-06-11, speed, excellent technique and an astonishing finish: Vasyl Lomachenko vs Roman Martinez is one of the best boxing fights of 2016 and it gets four stars!

The Wbo super-Fw champion Roman Martinez entered this fight with a professional record of 29-2-3 (17 knockouts) and he is ranked as the No.9 super featherweight in the world (currently the #1 in this division is Javier Fortuna). He suffered his last loss when he faced Mikey Garcia in 2013 (=Garcia vs Martinez), after this bout he has won over Herbert Quartey and Orlando Salido (=Salido vs Martinez I) but then he drew with Salido in their rematch (=Martinez vs Salido II).
His opponent, the 2012 and 2008 Olympic Gold Medalist and Wbo Fw champion Vasyl Lomachenko entered this fight with a professional boxing record of 5-1-0 (3 knockouts – but he has an amazing amateur record of 396-1) and he entered as the No.11 featherweight. He lost to Orlando Salido at his second pro bout in 2014 (via split decision, Salido vs Lomachenko), but then he has won four fights beating Gamalier Rodriguez (=Lomachenko vs Rodriguez) and Romulo Koasicha in 2015 (=Lomachenko vs Koasicha). ‘Rocky’ Martinez vs Lomachenko is valid for the WBO World super featherweight title. Watch the video and rate this fight!