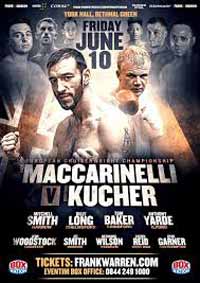 Review by AllTheBestFights.com: 2016-06-10, pretty good finish between Enzo Maccarinelli and Dmytro Kucher: it gets three stars.

The former Wbo Cw champion Enzo Maccarinelli entered this fight with a professional boxing record of 41-7-0 (33 KOs=80%) and he is ranked as the No.33 cruiserweight in the world. He suffered his last loss when he faced Juergen Braehmer in 2014 (=Braehmer vs Maccarinelli), since then he has won three bouts beating Roy Jones Jr in his last one (= Roy Jones vs Maccarinelli).
His opponent, Dmytro Kucher, has an official record of 23-1-1 (17 knockouts) and he entered as the No.46 in the same weight class. His only defeat occurred in 2013, against Ilunga Makabu, after this fight he has collected two victories and one draw. Maccarinelli vs Kucher is valid for the vacant EBU (European) cruiserweight title. Watch the video and rate this fight!