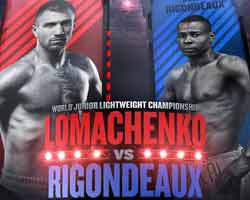 Review by AllTheBestFights.com: 2017-12-09, one sided fight between Vasyl Lomachenko and Guillermo Rigondeaux: it gets two stars.

The 2012 and 2008 Olympic gold medalist and world champion in two different weight classes Vasyl Lomachenko entered this fight with a professional record of 9-1-0 (7 KOs=78%) and he is ranked as the No.1 super featherweight in the world. He lost to Orlando Salido at his second professional bout in 2014 (via split decision, Salido vs Lomachenko) but since then he has won eight consecutive fights defending the Wbo super-Fw belt twice in 2017: with Jason Sosa (=Lomachenko vs Sosa) and against Miguel Marriaga (=Lomachenko vs Marriaga).
His opponent, the undefeated 2000 and 2004 Olympic bantamweight gold medalist and Wba super-Bw champion Guillermo Rigondeaux, has a perfect boxing record of 17-0-0 (11 knockouts) and he entered as the No.1 super bantamweight but he fought just three times in the last three years defeating Drian Francisco (=Rigondeaux vs Francisco), James Dickens (=Rigondeaux vs Dickens) and Moises Flores (then changed to a no-contest since Flores was knocked out with a punch as the bell rang, Rigondeaux vs Flores). Lomachenko vs Rigondeaux is valid for the WBO World super featherweight title. Watch the video and rate this fight!