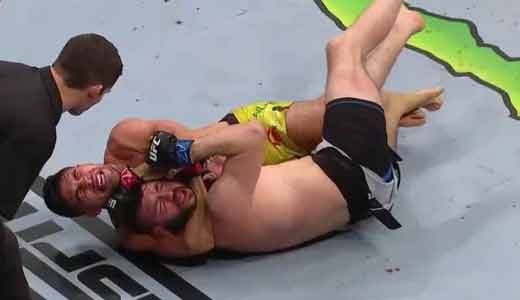 Review by AllTheBestFights.com: 2019-02-17, back and forth fight with some tough exchanges: Vicente Luque vs Bryan Barberena is one of the best mma fights of the year 2019 and it gets four stars (UFC Fight of the Night).

Vicente Luque entered this fight with a mma record of 14-6-1 (93% finishing rate) and he is ranked as the No.28 welterweight in the world. He was defeated by Leon Edwards in 2017 but then he has won over Niko Price, Chad Laprise and Jalin Turner.
His opponent, Bryan Barberena, has an official record of 14-5-0 (86% finishing rate) and he entered as the No.44 in the same weight class. He lost to Leon Edwards in 2017 (Leon Edwards vs Bryan Barberena) but he came back to win in 2018 against Jake Ellenberger (Bryan Barberena vs Jake Ellenberger). Luque vs Barberena is on the undercard of Francis Ngannou vs Cain Velasquez – UFC on ESPN 1. Watch the video and rate this fight!