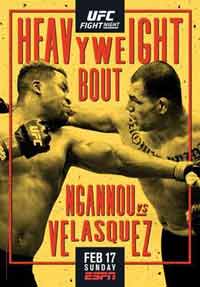 Review by AllTheBestFights.com: 2019-02-17, pretty good finish between Kron Gracie and Alex Caceres: it gets three stars (UFC Performance of the Night).

The undefeated black belt in Brazilian jiu-jitsu and judo Kron Gracie entered this fight with a perfect mma record of 4-0-0 (100% submission victory rate – he has never won via ko/tko) but he is not ranked as he hasn’t fought since December 31, 2016 when he defeated Tatsuya Kawajiri (Tatsuya Kawajiri vs Kron Gracie); in September 2016, he had also beat Hideo Tokoro (Gracie vs Tokoro).
His opponent, Alex Caceres, has a record of 14-11-0 (57% finishing rate) and he entered as the No.84 featherweight in the world. He lost to Wang Guan in 2017 but then he defeated Martín Bravo in 2018. Gracie vs Caceres is on the undercard of Francis Ngannou vs Cain Velasquez – UFC on ESPN 1. Watch the video and rate this fight!