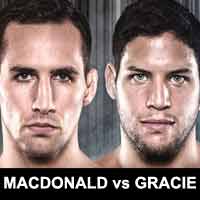 Review by AllTheBestFights.com: 2019-06-14, some good exchanges on the ground but it is not enough to get three stars: Rory MacDonald vs Neiman Gracie gets two.

The black belt in Bjj and current Bellator Ww champion Rory MacDonald entered this fight with a professional mma record of 20-5-1 (70% finishing rate) and he is ranked as the No.10 welterweight in the world (currently the #1 in this division is Kamaru Usman). In his last three bouts he has beat Douglas Lima (Douglas Lima vs Rory MacDonald), lost to Gegard Mousasi (trying to move up in weight class to the middleweight division, Gegard Mousasi vs Rory MacDonald) and tied with Jon Fitch (Rory MacDonald vs Jon Fitch).
His opponent, the undefeated black belt in Brazilian jiu-jitsu Neiman Gracie, has a perfect record of 9-0-0 (89% submission victory rate – he has never won via ko/tko) and he entered as the No.99 in the same weight class. In his last three bouts he has defeated Zak Bucia, Javier Torres (Neiman Gracie vs Javier Torres) and Ed Ruth (Neiman Gracie vs Ed Ruth). MacDonald vs Gracie, main event of Bellator 222, is the semi-final of the Bellator Ww World Grand Prix tournament and it is valid for the Bellator welterweight title (MacDonald’s second defense). Watch the video and rate this fight!