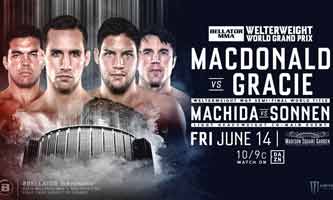 Review by AllTheBestFights.com: 2019-06-14, good fight between Lyoto Machida and Chael Sonnen: it gets three stars.

The black belt in karate, Bjj and former Ufc light-hw champion Lyoto Machida entered this fight with a pro mma record of 25-8-0 (48% finishing rate) and he is ranked as the No.12 middleweight in the world. He lost three consecutive bouts between 2015 and 2017, the last one against Derek Brunson (Brunson vs Machida) but then he has won over Eryk Anders (Lyoto Machida vs Eryk Anders), Vitor Belfort (4-stars fight, Vitor Belfort vs Lyoto Machida) and Rafael Carvalho (Lyoto Machida vs Rafael Carvalho).
His opponent, Chael Sonnen, has a record of 30-16-1 (40% finishing rate) and he entered as the No.32 light heavyweight. He fought twice last year beating Quinton ‘Rampage’ Jackson (Quinton Rampage Jackson vs Chael Sonnen) and losing to Fedor Emelianenko (Fedor Emelianenko vs Chael Sonnen). Machida vs Sonnen is on the undercard of Rory MacDonald vs Neiman Gracie – Bellator 222. Watch the video and rate this fight!