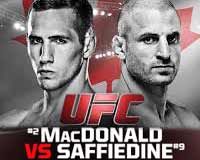 Review: 2014-10-04, pretty good finish between Rory MacDonald and Tarec Saffiedine: it gets three stars (UFC Performance of the Night). The black belt in Brazilian jiu-jitsu Rory MacDonald entered this fight with a professional mma record of 17-2-0 (71% finishing rate) and he is ranked as the No.3 welterweight in the world (currently the #1 in this division is Georges St Pierre); he suffered his last defeat at the end of 2013 when he faced Robbie Lawler (=MacDonald vs Lawler) but he came back to win in 2014 beating Demian Maia (=MacDonald vs Maia) and Tyron Woodley (=MacDonald vs Woodley).
His opponent, the former Strikeforce Ww champion Tarec Saffiedine, has an official record of 15-3-0 (40% finishing rate) and he entered as the No.17 in the same weight class, the last time he lost was in 2011 when he faced Tyron Woodley, since then he has won five consecutive fights, beating in his last bout Hyun Gyu Lim (=Saffiedine vs Lim). MacDonald vs Saffiedine is the main event of UFC Fight Night Halifax – UFC FN 54. Watch the video and rate this fight!