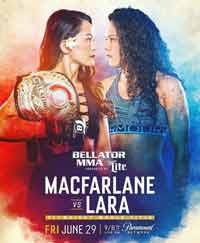 Review by AllTheBestFights.com: 2018-06-29, disappointing fight between Ilima-Lei Macfarlane and Alejandra Lara: it gets two stars.

The Bellator champion Ilima-Lei Macfarlane entered this fight with a perfect mma record of 7-0-0 (71% finishing rate) and she is ranked as the No.14 womens’ flyweight in the world. She fought twice last year winning over Jessica Middleton and Emily Ducote.
Her opponent, Alejandra Lara, has an official record of 7-1-0 (86% finishing rate) and she entered as the No.41 in the same weight class. She suffered her only loss when she faced Sabina Mazo in 2015, since then she has beat Janeth Alvarado, Lina Franco Rodriguez and Lena Ovchynnikova. Macfarlane vs Lara, main event of Bellator 201, is valid for the Bellator Women’s flyweight title (Macfarlane’s first defense). Watch the video and rate this fight!