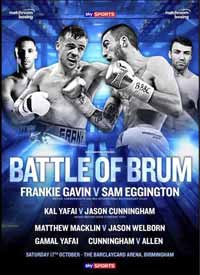 Review by AllTheBestFights.com: 2015-10-17, some good exchanges between Matthew Macklin and Jason Welborn but it is not enough to get three stars: it gets two.

Matthew Macklin entered this fight with a pro boxing record of 33-6-0 (22 knockouts) and he is ranked as the No.25 middleweight in the world while his opponent, Jason Welborn, has a record of 17-3-0 (6 knockouts). Both boxers suffered their last loss in 2014 but then they won two consecutive fights: Macklin was defeated by Jorge Sebastian Heiland (=Macklin vs Heiland) while Welborn lost to Liam Smith. Macklin vs Welborn is valid for the vacant WBC International super welterweight title; undercard of Sam Eggington vs Dale Evans (who replaces Frankie Gavin). Watch the video and rate this fight!