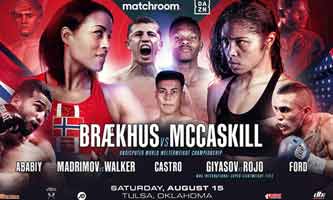 Review by AllTheBestFights.com: 2020-08-15, good exchanges between Israil Madrimov and Eric Walker: it gets three stars.
The undefeated Israil Madrimov entered this fight with a perfect boxing record of 5-0-0 (5 KOs=100%) and he is ranked as the No.35 super welterweight in the world. In his last three bouts he has won over Norberto Gonzalez, Alejandro Barrera (Israil Madrimov vs Alejandro Barrera) and Charlie Navarro.
His opponent, Eric Walker, has a boxing record of 20-2-0 (9 knockouts) and he entered as the No.41 in the same weight class. He lost to Brandon Adams in 2018 (via majority decision) but then he has won over Michael Moore, Jose Antonio Abreu and Damian Ezequiel Bonelli. Walker vs Madrimov is on the undercard of Cecilia Braekhus vs Jessica McCaskill. Watch the video and rate this fight!