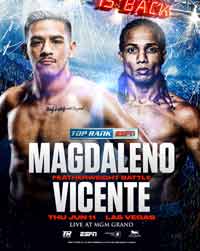 Review by AllTheBestFights.com: 2020-06-11, disappointing fight between Jessie Magdaleno and Yenifel Vicente: it gets two stars.

The former Wbo super-Bw champion Jessie Magdaleno entered this fight with a pro boxing record of 27-1-0 (18 knockouts) and he is ranked as the No.6 featherweight in the world (currently the #1 in this division is Josh Warrington). He suffered his only loss when he faced Isaac Dogboe in 2018 (Jessie Magdaleno vs Isaac Dogboe), after this bout he has beat Rico Ramos (Jessie Magdaleno vs Rico Ramos) and Rafael Rivera (Jessie Magdaleno vs Rafael Rivera).
His opponent, Yenifel Vicente, has a record of 36-4-2 (28 KOs=78%) and he entered as the No.40 in the same weight class. He fought three times last year defeating Albert Gonzalez and Rodolfo Hernandez Montoya but between these two fights he lost to Tramaine Williams. Magdaleno vs Vicente is the main event of the evening. Watch the video and rate this fight!