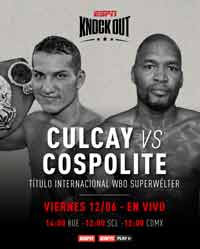 Review by AllTheBestFights.com: 2020-06-12, pretty good fight between Jack Culcay and Howard Cospolite: it gets three stars.

The former Olympian and former Wba light-Mw champion Jack Culcay entered this fight with a boxing record of 27-4-0 (13 knockouts) and he is ranked as the No.7 super welterweight in the world (currently the #1 in this division is Jermell Charlo). He fought three times last year losing to Sergiy Derevyanchenko (Sergiy Derevyanchenko vs Jack Culcay) but then he beat Stefano Castellucci and Jama Saidi (Jack Culcay vs Jama Saidi).
His opponent, Howard Cospolite, has an official record of 18-7-3 (6 knockouts) and he entered as the No.146 in the same weight class. He was defeated by Dylan Charrat in 2019 but he came back to win against Romain Peron in 2020. Culcay vs Cospolite is valid for the WBO International super welterweight title. Watch the video and rate this fight!