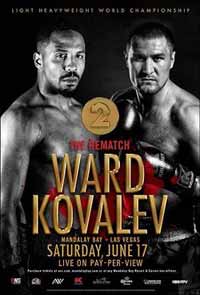 Review by AllTheBestFights.com: 2017-06-17, good fight between Arif Magomedov and Luis Arias: it gets three stars.

Arif Magomedov entered this fight with a pro record of 18-1-0 (11 knockouts) and he is ranked as the No.19 middleweight in the world. He fought twice last year losing to Andrew Hernandez (=Magomedov vs Hernandez) and beating Chris Herrman.
His opponent, the undefeated Luis Arias, has a perfect boxing record of 17-0-0 (8 knockouts) and he entered as the No.37 in the same weight class. Between 2016 and 2017 he has won over Gilberto Pereira dos Santos, Jorge Silva, Darryl Cunningham and Scott Sigmon. Luis Arias vs Arif Magomedov is valid for the USBA middleweight title; undercard of Andre Ward vs Sergey Kovalev 2. Watch the video and rate this fight!