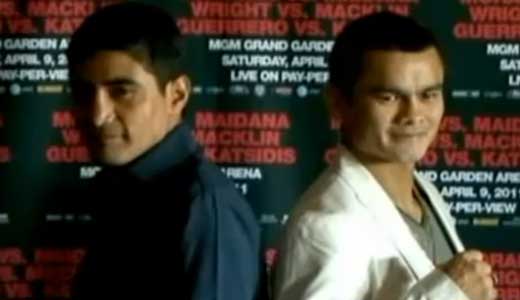 Golden Boy Promotions, Universum Box-Promotion and Box Latino organized a boxing event that is expected to be very spectacular, whose main event is the fight valid for the interim WBA World light welterweight title between Marcos Rene Maidana and Erik Morales. “El Chino” Maidana is one of those boxers that nobody wants to face, has a record of 29 wins (with 27 Ko) and two defeats, one against Andriy Kotelnik and the last one versus Amir Khan, but the Argentine boxer has not never lost really, since both fights (especially in Germany against Kotelnik) were very questionable decisions. I think that for “El Terrible” Morales this fight was the wrong choice, the Mexican boxer is older than 7 years and does not win with high-level opponents since 2005 (against Manny Pacquiao).

On the same evening another fight will be very exciting: Robert Guerrero vs Michael Katsidis, two very spectacular boxers who will fight for the interim WBA and WBO lightweight title. There may be other 3 interesting fights: Danny Garcia vs Nate Campbell, James Kirkland vs Nobuhiro Ishida and Paul Malignaggi vs Jose Miguel Cotto.