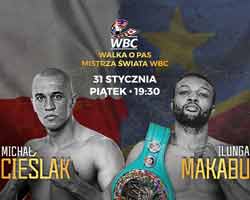 Review by AllTheBestFights.com: 2020-01-30, good fight between Ilunga Makabu and Michal Cieslak: it gets three stars.

Ilunga Makabu entered this fight with a professional record of 26-2-0 (24 KOs=92%) and he is ranked as the No.7 cruiserweight in the world (currently the #1 in this division is Mairis Briedis). He was defeated by Tony Bellew in 2016 (Tony Bellew vs Ilunga Makabu) but since then he has won seven bouts defeating Giorgi Tevdorashvili, Dmitry Kudryashov (Dmitry Kudryashov vs Ilunga Makabu) and Aleksei Papin in his last three (Ilunga Makabu vs Aleksei Papin).
His opponent, the undefeated Michal Cieslak, has a perfect boxing record of 19-0-0 (13 knockouts) and he entered as the No.8 in the same weight class. In his last three bouts he has won over Dusan Krstin, Youri Kayembre Kalenga (Michal Cieslak vs Youri Kayembre Kalenga) and Olanrewaju Durodola (Michal Cieslak vs Olanrewaju Durodola). Cieslak vs Makabu is valid for the vacant WBC World cruiserweight title. Watch the video and rate this fight!

Where: Kinshasa, Democratic Republic Of The Congo