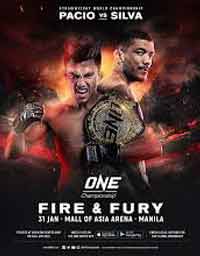 Review by AllTheBestFights.com: 2020-01-31, fight not so exciting between Joshua Pacio and Alex Silva: it gets two stars.

The ONE Sw champion Joshua Pacio entered this fight with a professional mma record of 16-3-0 (87% finishing rate) and he is ranked as the No.17 flyweight in the world. He fought three times last year losing the first bout with Yosuke Saruta (via split decision) but then he took revenge on him via knockout in their second fight and he also beat Rene Catalan.
His opponent, the former ONE strawweight champion Alex Silva, has an official record of 9-4-0 (89% submission victory rate – he has never won via ko/tko) and he entered as the No.81 in the same weight class. He lost three consecutive bouts between 2018 and 2019, the last one with Yoshitaka Naito, but then he has won over Stefer Rahardian and Xuewen Peng. Pacio vs Silva, main event of “ONE Championship: Fire & Fury” (One 107) is valid for the ONE Strawweight title. Watch the video and rate this fight!