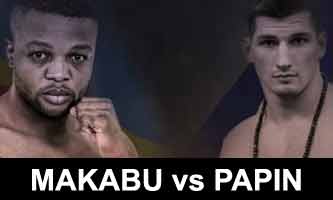 Review by AllTheBestFights.com: 2019-08-24, close and tough fight between Ilunga Makabu and Aleksei Papin: it gets three stars.

Ilunga Makabu entered this fight with a pro record of 25-2-0 (24 KOs=96%) and he is ranked as the No.6 cruiserweight in the world (currently the #1 in this division is Oleksandr Usyk). He was defeated by Tony Bellew in 2016 (Tony Bellew vs Ilunga Makabu) but since then he has won six bouts defeating Giorgi Tevdorashvili and Dmitry Kudryashov in his last two (Dmitry Kudryashov vs Ilunga Makabu).
His opponent, the undefeated former Wako-Pro kickboxing world champion Aleksei Papin, has a perfect boxing record of 11-0-0 (10 KOs=91%) and he entered as the No.25 in the same weight class. In his last three fights he has won over Ismayl Sillah, Willbeforce Shihepo and Alexandru Jur. Makabu vs Papin is valid for the WBC Silver cruiserweight title; undercard of Sergey Kovalev vs Anthony Yarde. Watch the video and rate this fight!