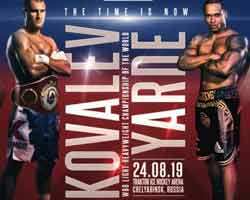 Review by AllTheBestFights.com: 2019-08-24, great fight between Sergey Kovalev and Anthony Yarde: it gets three stars.

The former Ibf, Wba and current WBO light-Hw champion Sergey Kovalev entered this fight with a professional record of 33-3-1 (28 KOs=85%) and he is ranked as the No.1 light heavyweight in the world. In his last two bouts he has faced twice Eleider Alvarez losing the first fight (the Russian was ahead on points but he was knocked out in the seventh round, Sergey Kovalev vs Eleider Alvarez I) and winning the rematch (Eleider Alvarez vs Sergey Kovalev II).
His opponent, the undefeated Anthony Yarde, has a perfect record of 18-0-0 (17 KOs=94%) and he entered as the No.13 in the same weight class. In his last three bouts he has won over Dariusz Sek (Anthony Yarde vs Dariusz Sek), Walter Gabriel Sequeira (Anthony Yarde vs Walter Gabriel Sequeira) and Travis Reeves (Anthony Yarde vs Travis Reeves). Kovalev vs Yarde is valid for the WBO World light heavyweight title (Kovalev’s first defense). Watch the video and rate this fight!