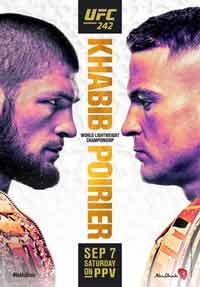 Review by AllTheBestFights.com: 2019-09-07, fight not particularly good between Islam Makhachev and Davi Ramos: it gets two stars.

The 2016 world combat sambo champion Islam Makhachev entered this fight with a mma record of 17-1-0 (59% finishing rate) and he is ranked as the No.20 lightweight in the world. He suffered his only loss when he faced Adriano Martins in 2015 (Adriano Martins vs Islam Makhachev), since then he has won five bouts defeating Kajan Johnson and Arman Tsarukyan in his last two (Islam Makhachev vs Arman Tsarukyan).
His opponent, the black belt in Bjj and 2015 ADCC champion Davi Ramos, has an official record of 10-2-0 (80% finishing rate) and he entered as the No.61 in the same weight class. He was defeated by Sergio Moraes in 2017 but then he has won four bouts beating John Gunther and Austin Hubbard in his last two. Makhachev vs Ramos is on the undercard of Khabib Nurmagomedov vs Dustin Poirier – UFC 242. Watch the video and rate this fight!