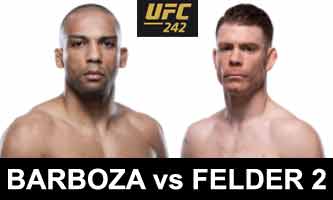 Review by AllTheBestFights.com: 2019-09-07, pretty good fight between Paul Felder and Edson Barboza 2: it gets three stars.

The black belt in karate and tae-kwon-do Paul Felder entered this fight with a pro mma record of 16-4-0 (69% finishing rate) and he is ranked as the No.9 lightweight in the world (currently the #1 in this division is Khabib Nurmagomedov). He lost to Mike Perry in 2018 (Paul Felder vs Mike Perry) but he came back to win against James Vick in 2019 (Paul Felder vs James Vick).
His opponent, the black belt in tae-kwon-do Edson Barboza, has a record of 20-7-0 (65% finishing rate) and he entered as the No.11 in the same weight class but he won just one out of his last four bouts, against Dan Hooker in 2018 (Edson Barboza vs Dan Hooker); after this fight he has been defeated by Justin Gaethje in 2019 (4-stars fight, Edson Barboza vs Justin Gaethje). In their first bout Felder had lost to Barboza via unanimous decision (July 25, 2015 – Edson Barboza vs Paul Felder I); this second fight is on the undercard of Khabib Nurmagomedov vs Dustin Poirier – UFC 242. Watch the video and rate this fight!