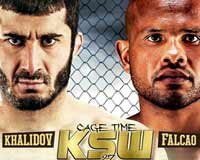 Review: 2014-05-17, high pace and good finish: Mamed Khalidov vs Maiquel Falcao gets three stars. Mamed Khalidov entered this fight with a professional mma record of 28-4-2 (96% finishing rate) and he is ranked as the No.11 middleweight in the world, he suffered his last defeat in 2010 when he faced Jorge Santiago for the Sengoku Mw title (via split decision), since then he has collected eight wins and one draw; last year he fought twice defeating both Melvin Manhoef (=Khalidov vs Manhoef) and Ryuta Sakurai in the first round (=Khalidov vs Sakurai 2).
His opponent, the black belt in bjj Maiquel Jose Falcao Goncalves, has an official record of 32-5-0 (84% finishing rate) and he entered as the No.38 in the same weight class, he won the Bellator Mw tournament in 2012 against Andreas Spang (=Falcao vs Spang) but then he lost the title-shot against the champ Alexander Shlemenko (his only fight of 2013 Shlemenko vs Falcao); he came back to victory in 2014 defeating Dibir Zagirov at Oplot Challenge 100. Khalidov vs Falcao is the main event of “KSW 27: Cage Time”. Watch the video and rate this fight!